"Norse maintains the world’s largest dedicated threat intelligence network. With over eight million sensors that emulate over six thousand applications – from Apple laptops, to ATM machines, to critical infrastructure systems, to closed-circuit TV cameras - the Norse Intelligence Network gathers data on who the attackers are and what they’re after." 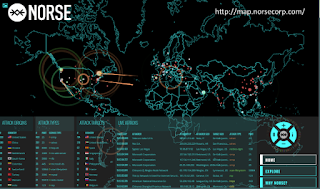 Posted by mverhaart at 3:53 PM